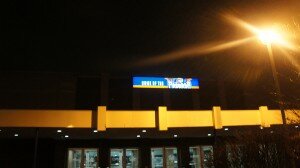 It seems like 100 days ago, the Flint Firebirds made national headlines for the firing of their coaches, John Gruden and Dave Karpa. The coaches were fired for not giving team owner Rolf Nilsen’s son Hakon ice time. Their dismissal inspired the players, including Nilsen, to throw their jerseys on the floor of the elder Nilsen’s office. The next day, the coaches were re-instated. In a press release Rolf Nilsen stated he made an “irresponsible mistake”.
Fast forward 100 days, both coaches have been re-fired. The team’s press release did not state a reason. In the same release found here, the fourth paragraph says:

Thursday is “College Night” Featuring $2 beers and $2 hot dogs for all fans in attendance and all college students will receive $2 off tickets with valid ID. Thursday is also “Pucks for Paws” night. Benefiting the Humane Society, fans can bring 1 new pet care item in to receive a complimentary $15 Silver Level ticket, courtesy of Magoo’s Outlet.

For an inaugural season, firing the same coaches twice makes the owners/organization looks like a joke especially mentioning the cheap beer. The Commissioner of the OHL, David Branch, has issued a press release regarding the firing and mentioned an immediate review of the organization before proceeding with future steps.

With all these events and imminent OHL actions, the question then becomes: Who is Rolf Nilsen?

Captain (Of what I’m not sure) Rolf Nilsen born and grew up in Norway and played a variant of hockey called bandy. He moved to the United States 28 years ago and got into hockey while living here. His biography states that: “As a hockey fan and a highly successful businessman, Nilsen has had the goal of eventually owning his own team.”

His dream became one step closer on December 9, 2014 when his company, IMS Inc. a watertight door manufacturing company based in Cape Coral Florida, bought the then Perani Arena. At the time of the purchase, the NAHL Flint Warriors called the Perani home. As a side note, the former co-owner/GM/Coach of the Flint Warriors is the new Saginaw Spirit head coach Moe Mantha. Nilsen then hired as President of IMS, Costa Papista. Papist, the former President of the North Bay Centennials & Saginaw Spirit, job was to help Nilsen get an USHL franchise. Two days later, USHL President and Commissioner Bob Fallen issued a statement about an application for an USHL expansion team. He mentioned that the league was not seeking to expand the 2015-16 season. He then went on to say almost prophetically ”It should be noted that when it comes to any future expansion, our clear mandate is to seek ownership groups in markets/cities that are capable of securing long-term sustainability and success on and off the ice.”

In a mLive article, Fallen is quoted as saying “It’s not as simple as somebody sending us a check … IMS needs to (show) the Flint market is viable… if they are awarded a member club in Flint, we want it there in 20 years.” In the same article, Papista and Nilsen stated that there are other possible leagues such as the Ontario Hockey League.

Fast forward a month to January 9th and IMS withdraws the USHL application days before consideration by the USHL board of governors. Five days later, the Plymouth Whalers announced the transfer of ownership from Peter Karmanos to Rolf Nilsen, subject to OHL Board of Governors approval. February 2, 2015 the OHL Board of Governors approve of the sale and relocation of the Plymouth Whalers to Flint.

One year and 16 days to the day that OHL Commissioner David Branch said “We are excited to welcome Rolf Nilsen and the communities of Flint, and Genesee County, Michigan, to the OHL family”. Branch would say “Mr Nilsen and his appointees on the management and coaching staff including Sergei Kharin are suspended from Flint Firebirds’ hockey operations until further notice”.

The reason for such a statement? The re-firing of John Gruden and Dave Karpa. Is Rolf Nilsen solely responsible for the Flint Firebirds demise? No. In order to be an owner of a team in the OHL, you need to be approved. This thorn in Branch’s side is one planted by him. What

Here are some demographics about Flint (as in 2014 according to the US Census):

41.6% Of All people in Flint live below the poverty line

As of September 28, 2014, Flint was then rated one of the most dangerous cities to live in the United States.

There are other questions that would raise other suspicions such as , why would a company from Florida buy a hockey arena in Michigan? Why push for an USHL/OHL team as a tenant while forcing the NAHL Flint Warriors homeless? Has anyone done their research as in if Rolf Nilsen only started looking for a team to buy when his son becomes eligible to play for the team?

The sad reality is that the OHL has failed to do it’s homework when it comes to Flint and Rolf Nilsen’s intention to own team. It would be a different story if Nilsen lived in Flint or Michigan instead of Cape Coral Florida. With the league takeover of the organization, does Nilsen lock them out of the arena he owns? What if the league forces his son to a lower level of hockey such as Tier 2 jr. A or Jr. B, does he fold the team? Does he sell the team at the end of the season?

It’s going to be a very interesting couple of months for the Flint Firebirds as well as the OHL as a whole.